Well this is my first in series of exclusive interview on my BLOG with personalities . this first in its series is starting with an exclusive interview(gist) with a comedian SLK., co-founder/CEO  at Laff Therapy Enterprises  Lives in Lagos, NigeriaFrom Sagamu.

SLK is a young actor, playwright, MC and comedian! He started stage acting eleven years ago and also starred in the movie ‘ONIBUKUN’. He then started stand up comedy professionally on the 18th of December 2009. SLK has a reputation of doing clean and mature jokes! He also boasts of unarguable originality as he never performs ‘another man’s material’. These virtues have endeared him to the hearts of many youths nationwide!

If you can’t have an upcoming pilot or upcoming surgeon

then why would there be an upcoming comedian. “

Q: Who are you? Tell us about yourself

A: “I am Salako Oluwaponmile also known as SLK! A comedian, actor, playwright, blogger! I like to just call myself a humorist! I hail form Ogun State, Nigeria. I am the second of two!  I guess that’s all about me” 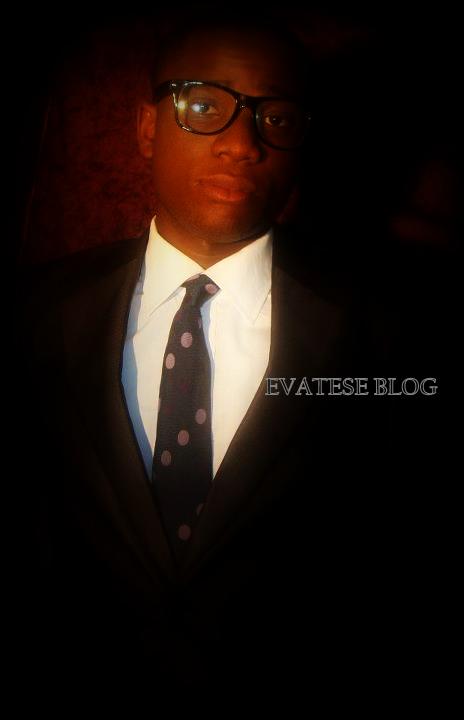 Q: Describe yourself in 3 words

A: God-fearing, funny and friendly

Q: What motivated you most into your career? What was the driving force that’s still keeping you?

A: ok just started my blog last month! It’s called slk color blogging! It’s just an exhibition of humorous creativity and once in a while , a bit of serious talk! But majorly humour all the way. We (laff therapy) have also worked on audio cd! Which we are in talks with a marketer on! And all these go on while the events and gigs roll in.

Q: Who and what inspires you ?

A: first of all, it has to be God! There are some things i say, write or do that i just can’t explain! As in I can’t trace my thought pattern! It just couldn’t have been me. God has been the greatest source of inspiration! i also get inspired by people around me and my environment to be generic

Q: What’s your philosophy on dressing? What dictates your fashion sense?

A: laughing, I think I am the ‘wrongest’ person to answer this question! I must say, I on my own, am not the fashionista! Thank God for Cyril Bryan that clothes me. He’s been doing a great job! be that as it may, I believe in dressing for the occasion vis-a-vis what you are comfortable in! I can’t wear a t-shirt to anchor someone’s wedding for instance! and it might not be appropriate to wear a 3-piece suit for a beach party! i think you should try to look good for the occasion!

Q: Tell us about your academic background, how did your family and friends take the change considering you studied something else in school ?

A: I like this question! i believe that nowadays especially in the part of this world , we have gotten the concept of academics wrong! Academics originally are the training for your chosen career path. so scientist’s academics should not be literature parse but physics and chemistry! So academics are according to your career! well back to your question, since i put in for elect elect, my parents obviously did not like the fact that it affected my ‘academics’. i on the other hand, believe that your career should  determine your academics  not vice versa as it obtains now! This is why i blogged about SLK the graduate without a gown! you could check it up for more info.    http://slkomedy.blogspot.com/

Q: What challenges do you face in the industry ?

A: well apart from school and parental challenges, which are personal,  i think the comedy industry is presently grappling with joke plagiarism  and this gives me a lot of concern! a situation where a comedian performs 10 jokes and 9 of them are from different comedians and the last one from the internet  and he gets paid, to me is nothing but theft! i also face the challenge of being prejudiced because of my age! i have heard some clients tell me that I am quite young hence they express fears of incompetence but thank God i always prove my mettle in the end

Q: Who are your role model, heroes and mentors ?

A: first of all I learn a lot from my colleagues in laugh therapy: Dee one and Emma ohmaGod! I also love ali baba so much i admire his creativity and business acumen I also admire the fact that he has made ours a job to be proud of in this white collar crazy era of ours. i love basket mouth because he knows what his audience wants per time. I respect Julius agwu he is the most spontaneous comedian I know. I love bovi because of his creativity and originality I love Tyler Perry that guy is funny and he has been able to prove his own and that he can do ‘badt’ all by himself

Q: How do you manage your female fans?

A: mange ke! I can’t manage o! just kidding  it was Winston Churchill that said discipline is the soul of an army. I think that tool would come in handy here. You just try to be discipline. I guess one has to be cool headed and no miss opportunities because some of them are going to be very useful like you now! sebi you are my female fan and see me on your blog! lol!

A:  ah! Unlike what i say in my jokes! We were not poor o! At all. Although there were some trying times! Like I said I am the last boy. I grew up in a very Christian home. I thank God for that. My father was the drama director of our church and he had a drama ministry. In fact when I was 3 they shot a movie in my house. So I grew up with the stage. My father strived to get us the best of education which I am forever grateful for, my mother is a caterer whose passion was to see people eat. I guess that explains my size when I was a kid. I must say growing up was confined. My dad was a disciplinarian hence we were not able to express ourselves. But we thank God that today I can look back and say I had/ have a great family.

A: I am proudly the only single guy at laff therapy

Q: what advice do you have for upcoming and new Nigerian comedians and also for your fans?

A: I don’t like the name upcoming. If you can’t have an upcoming pilot or upcoming surgeon then why would there be an upcoming comedian. There are just new comers. My advice to us new comers is this: whatever we do we should embrace originality because plagiarism gradually murders your creativity. God did not name animals in the garden he gave Adam that creative freedom. Don’t murder your creativity. Also we should keep working hard. I don’t believe any profession is seasonal. it’s all about re-inventing one’s  self  that way you  would remain relevant like bill Cosby, alibaba , Kenneth hagin even segun odegbami. Then for my fans keep blowing! ‘Smiles’  just kidding I want to thank them for believing in my gift. Just want you to keep supporting the SLK brand with your prayers and words of encouragement. Expect greater works from your boy and laugh therapy at large *takes a deep breath* Eva you will pay me for this. this questions  kon be like say i de write WAEC

so sweet!! Ibiere & Little Miss Zahra Agwu at the 2012 Festival of Love in Lagos 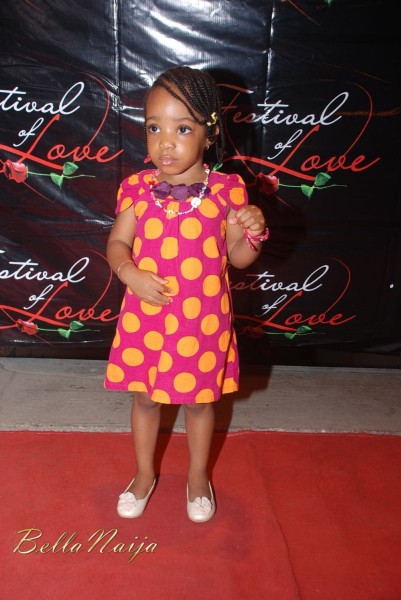 Julius Agwu’s “2 loves”, his wife Ibiere and daughter Zahra were there to support and took time out to pose on the red carpet. Ibiere looked gorgeous in her pink, blue and gold print shift dress while Zahra made a style statement in her colourful dress.

Love it! Just so cute.