WHO IS KOREDE BELLO ? + PHOTOS

Hello EB lovers , fans and readers… This week on EB Celebrity of the week segment, i would be talking about one of the youngest, fast rising acts in the Nigerian music industry. Ladies love him,..The 18-year-old guitarist, singer, songwriter and composer is currently scoring musical points after being recently signed on with Ace record  Label camp.  He is a rising sensational Singer. The Teenage Mass Communication student and multiple award-winning artiste and even an ambassador.. Im proud to present to you .KOREDE BELLO

Korede Bello Born on the 29th of february END_OF_DOCUMENT_TOKEN_TO_BE_REPLACED

Posted in CELEBRITY OF THE WEEK, HOME

Finally the  video for the popular song and hit single by the Mavin crew “Dorobucci” which spread caught the hearts of many is out. The video directed by SA based Nick Roux of Molotov Cocktail Productions stars the Mavin All-star crew; Don Jazzy, Tiwa Savage, Dr Sid, D Prince, Korede Bello, DiJa and Reekado with guest apperance from winner of CHOMAVINSUPERFAN  Natalie Pitswe

Posted in HOME, VIDEOS AND MUSIC

A look at Nigerian favorite music videos in 2013, reveals that Naija music has indeed found a place in our hearts and on our dance floors. Songs like Ada Ada by Flavour, Caro by Starboy feat L.A.X & Wizkid, Personally by P-Square,  were some of the  music videos that rocked Nigeria in 2013.

END_OF_DOCUMENT_TOKEN_TO_BE_REPLACED

Posted in REVIEWS, VIDEOS AND MUSIC

HILARIOUS LETTER TO DBANJ FROM A LASU STUDENT

Hello readers , I stumbled across this hilarious letter from a student written to Nigerian Artist Dbanj. Read and drop your comments here. 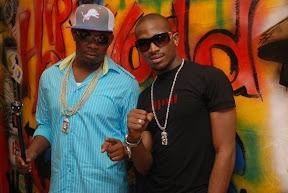 An Exclusive letter from a Fan to D’Banj. Dear Oyebanjo, Dapo Daniel AKA D’Banj,I am seated at a local restaurant here at the Lagos State University, Lagos, Nigeria, drinking a bottle of Fayrouz and listening to the sound of the generator, which is the only source of electricity around here.I have watched your latest music video.
END_OF_DOCUMENT_TOKEN_TO_BE_REPLACED

You must have seen the (above) photo of MAVIN Records’ boss, Don Jazzy and his new hot executive Sammerah Ahmed. Some blogs claim she is his girlfriend…while others claim she is his personal assistant….
Well, a particular blogsite (name withheld) wrongly stated that the “lady’ in question is Don Jazzy’s girlfriend and to make matters worse, the blog made a malapropism by mispelling ‘reveal’ with ‘review’- and it practically got Don Jazzy ‘mad’.
See  Don Jazzy reaction below:

It went down live at ocean view hotel yesterday night , 21st december 2012 as the First Baddest Concert from EME crew took lagos down. It was crazy. Lots of people trooped there.
Most celebrities were not left out.
The official after party would be at Mavin’s DonJazzy Pop night club
Davido made an important statement concerning Wizkid saying that Wizkid is his best friend and in return baddest guy ,Wizzy said thank you. Hmmm. I hope its true sha o. They both performed “All of you”.

Wizkid and Wande coal performed .Shadyee perfomed his first single o poju. The Ebutte-metta beat was not left out performed by Banky W. Banky W and Stunning Waje gave the crowd the peformance of “Thief my kele”. Infact right there on stage “Lagos Party” went down by Banky W. He also showed them “Strong thing”

The Mavin crew was not left out as D’prince Performed “goody bag” and “Take Banana”. Also Don jazzy thrilled the crowd.
My one and only favorite Aboki Ice Prince was not left out as he also showed the crowd how Aboki is .Banky W and Olu Maintain performed “big boy “. Olumaintain also performed “Nawti Nawti”
Lovely Skales performed “Mukulu” and “Komole”.
Wizkid and Lynxx tried to find their “Fine Lady”.
The crazy part was that there was no break at all.
Samklef performed “molowo noni”. Samba was not left out by Wizkid nd Fela.
As usual our OMOBABALOWO brother -Davido sprayed money at the crowd At the regular stand. Hmmm.
The EME all stars performed “Sunmimo”.
Wizkid performed “Pakurumo” in reggae style which was crazy tho.
Niyola ,First lady of EME who was stunning performed her single “Don’t Delay Me”
Mavin’s Wande Coal performed “Get down low”
Soundsultan , Mo Eazy was spotted there.
Watch out for morE updates

PERFORMING ALL OF YOU -WIZKID AND DAVIDO

LYNXX AND WIZKID SEARCHING FOR THEIR FINE LADY